More than a century ago Michael Faraday speculated that the electromotive force acting on the charge of an electron moving through a device or circuit is proportional to the time derivative of the magnetic field. The electromotive force and huge magneto resistance in magnetic tunnel junctions was brought into life thru a device by University of Miami Physicist Stewart E. Barnes, of the College of Arts and Sciences and with his collaborators at the Universities of Tokyo and Tohoku, Japan, which have created a device that can store energy in magnets rather than through chemical reactions.

This is a step in the direction which my theory about energy transitions between different dimensional time-space also applies, but above mentioned scientists think of it through conventional quantum theory, also based on Faraday's laws.

The above device stored thousand times more energy and was able to provide it for thousand times longest time period as predicted, which is way over anybody's expectations. Through experiment was done in nano-meter dimensions, it might be applied on larger devices.

My biggest replica to this test is the base of thinking itself. Scientists are trying to explain what happened and how the huge energy was stored using known laws, while my opinion is quite different.

What happens there indeed?

The similar applies to dense magnetic field inside permanent magnets.The core of my speculative theory claims, that within very dense magnetic fields time-space is compressed or slowed down very similarly, as inside very strong gravitational fields.

But on the other side we know, magnetism is more like electricity and less like gravity. Electricity (applies to light, too) and magnetism both have and need known carrier particles, while gravity does not...ok, maybe the Strings theory or discovery of Bozon could give us more knowledge, but as of now, gravity does not need a particle to exist.
Also, both, electricity and magnetism are relative and related to velocity, which does not need to be at speed of light. Instead any speed will do.

So, what's the point? How can magnetism be related to electricity, while having a property of gravity?

If we start with known photon as a carrier for electromagnetic force or light, we know it exhibits both, wave and particle properties, and further, photon mass does not obey base mathematics by summing up the mass of photons, where single photons in observed space do not have any mass, but sum of observed space does.
This and many more anomalies in any known theories point into single direction of imprecision. Or even erroneous. Whish leads to conclusion: either we did not define particle or energy properly, or there is something left beyond, undefined, unknown.

And even more - quantum physics does not bother explaining, or if you like, does not reach so deep to explain where eV charge and energy for electrons orbiting around nucleus atomic core comes from, so quantum mechanics defined it simply as a property of electron. But by my opinion, there is more than just a simple property.
I believe that just there, at the imaginary paths of electrons and our imaginary picture of electron, which is not a particle, but has also some properties of a particle - well, here are some transitions of energy layers hidden. Quantum mechanics attaches magnetism property to electrons orientation, and my theory speculates, that this magnetic force is THE compressing mechanism on micro-level, which extracts energy to keep atom "alive" from upper dimensional space. To easier understand what I mean, we can imagine electrons rotation as a magnetic "pump", which alternates magnetic and electrical property of electron with very high frequency. Within each pump cycle, electron orbit enters one layer deeper into upper dimension, again said very simple, for example, jumps back and forth in time scale, so the orbit has a property of a slice of energy from the past and from the future. This results in potential difference and produces internal charge of electrons.

Now, one of the spikes in my theory is the speculation, that by dynamic influence with external magnetic field we can produce electric current on electron spin level. Each electron spin may have magnetic orientation changed, acting like a small electric generator. Electrons even do not need to be structured like in permanent magnets, but can or, in fact, MUST change positions for the electric current to occur.

My theory tries to unveil the property of energy (and mass?), which can be layered, like into slices, where each slice is a bit shifted in time-space, or better, it extends into upper dimension, and this extent could be of any possible megnitude. There could be only one single layer of energy, which we can detect, produce, store and manipulate with, but there could also be many more layers, extending into upper dimension, which we cannot detect.


So how can we reach those other layers of energy or mass from upper dimension?

Now, with all those writing I am speculating a lot, but now my speculations will go even further. Don't blame me, I am just thinking :) Ok, my idea on how to reach the upper dimensional energy is a kind of time-space compressor, with the principle of already mentioned black hole.
This compressing mechanismus would squeeze our time-space continuum, like squeezing a tube, but only inside a special container, which could be a magnetic field container (different time-space properties inside dense magnetic field, against normal properties outside of it). I almost said also electric field, but no, electric or electromagnetic field can not be used to compress it's own time-space, because...well, I don't know, I just have such feeling. Maybe because electricity is a RESULT of forces, consequence of particle movements, while magnetism and gravity are BASE energies, with static properties, which do not need relative velocity for existence. Therefore gravity and magnetism may get caught into closed loop and produce almost infinite force, while electricity wores itself out in a closed loop. 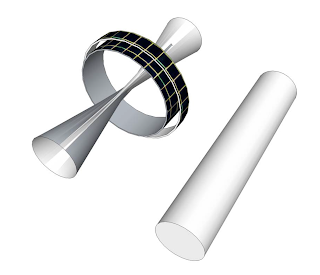 This picture shows our normal time-space continuum, represented by straight tube, and how it might look like when influenced by strong magnetic (or gravitational) field.
Of course, this is just a visual aid, representation to easier understand what's going on, while in reality who knows, how it really looks like.

What's missing in this picture is our normal time-space in left picture, which you can imagine as putting "normal" tube over squeezed one - this normal tube would represent our normal time-space, which remains un-squeezed for outside observer.
So, when time-space inside strong magnetic field gets squeezed, the un-seen outer time-space (which is not in the picture) gets access to all the layered energy (or mass?) inbetween "normal" and "squeezed" continuum. Magnetism inside squeezed tube would need to break apart into base particles, atoms, maybe quarks, to return into normal time-space...but in such a situation our tube would inflate instead of squeeze.


What this means for energy storage?


Well, I think this means we can store thousands or millions of times more of energy inside permanent magnets, than with any other chemical method, which we are using now. The principle of magnetising is quick and seemingly permanent (because stored energy is so large, that it seems it never wores out), and is so quicker than battery recharging, that any comparison fails out unfair. Beside, stored energy is much, much larger on volume unit, compared to chemical batteries, which finally renders today's energy storage useless.

My prediction and oppinion is that in near future we will be able to store energy in small permanent magnet-type batteries, and one tiny battery will be able to run a vehicle for a month or even a year.
Posted by Labsy at 5:02 AM