It was a good night


Last week seems something happened. Among other things that happen all the time, one special was noticed by me. Actually, it was produced and induced by me, playing with one of permanent magnet motors setup on my desk, I noticed some interesting effect.

Under simple controlled environment I managed to generate a constant rotation force to the rotor and thus compensate the friction of roller bearings for a significant value! The rotor itself normally stopped after 5 turns in free run, after it was pushed by spring lever. After applying really weird stator permanent magnets, rotor kept turning freely for another 10 or 11 rounds, achieving a total of 15 to 16 turns before it stopped by itself.

This is over 300% increase in pure magnetic layer! 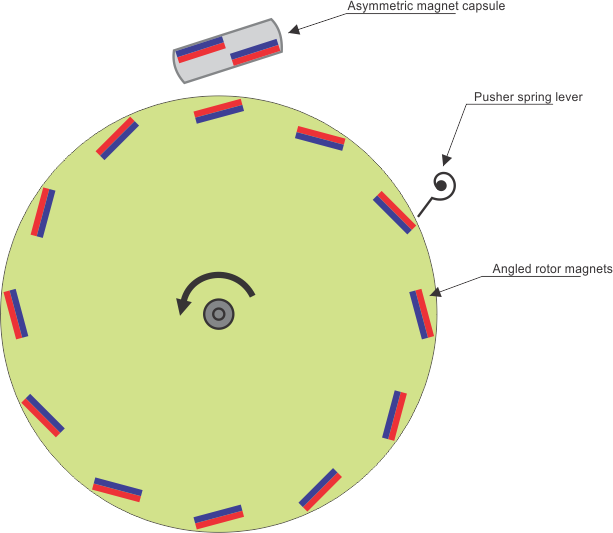 Next step is to repeat the test in more steady and measurable environment, with precision under 0,5 mm and with a bigger device. Also, variations of rotor magnets angling are to be examined, because I really can only suspect what happened.


I assume I managed to produce asymmetric permanent magnet by combining 2 Neodymium magnets within 2 opposite-set magnetic shielding caps (see picture above, Asymmetric magnet capsule). This construction probably skew magnetic field, concentrated magnetic force in a way that resulting attraction forces were much lower than repelling forces against rotor magnets. In that manner, rotor was constantly pushed to rotate more than it was dragged back to be stopped.

The gain in constant push resulted in effect, that rotor, which was always initiated by spring lever on the side, did not make just 5 turns as normal (when only friction of bearings is slowing it down), but instead it kept turning for at least 15 turns. I see no other explanation, beside the obvious: magnetic field can be directed asymmetricaly, so a constant push in tangental direction from permanent magnets setup. I guess, if I would have more of those Asymmetric magnetic capsules, mounted all around the rotor, it might have rotate by itself, even more...it would produce rotation force out of permanent magnets!

Well, this is tricky part. The experiment success came out of few hours of playing with magnets, so it was not scientific experiment, but rather a random discovery. Magnets were 2cm long square bars with 0,5cm side, magnetized along their shorter side. The Asymmetric magnet capsule consisted of a pair of same magnets, encapsulated in two caps of special material with low coercitivity.
The positions and angles of magnets are just fictional here on the image! I have marked and documented the exact angles and positions for my further experiments, so I will not disclose them to the public at the moment.